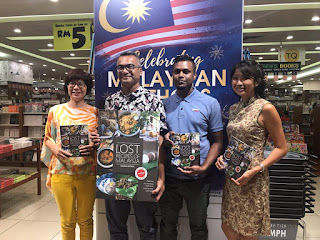 25 Aug 2019 - The Lost Recipes of Malaysia Cookbook (revised edition) was launched at MPH, MidValley in conjunction with MPH bookstore's Support Your Local Malaysian Authors Campaign for the 62nd Merdeka Day.

The crowd was modest supported by friends, family and some of our At 19 Culinary customers. Book sales were brisk with buyers taking the opportunity to approach the authors who were present to sign-off their cookbooks.

We wish to thank everyone who came to support us and to MPH Publishing for organising the launch event and for believing in the cookbook to have a revised edition published again in 2019 after it was first launched 5 years ago. The cookbook won 2nd prize in the World Gourmand Cookbook Awards 2015.

Posted by At Nineteen Culinary Studio at 12:16 AM No comments: 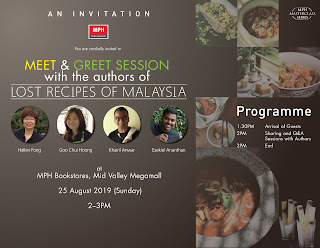 Come and Support Your Malaysian Authors

25 Aug 2019 - At 19 Culinary Studio's Lost Recipes of Malaysia cookbook (revised edition) will be launched at MPH Midvalley on 25 Aug 2019 (2pm-3pm). This cookbook is one of our best achievements as we celebrate our cooking school's 9th Anniversary in 2019.

Lost Recipes of Malaysia cookbook was first launched in May 2014 and won 2nd prize for Best Historical Recipes at the World Gourmand Cookbook Awards. This revised edition to be launched after 5 years since it was first published speaks volumes for the quality and content of the cookbook. Most would have faded into oblivion...lost and forgotten.

You are invited to come to the launch event at MPH Midvalley on 25 Aug and meet the authors. Get your cookbook personally autographed too!

Posted by At Nineteen Culinary Studio at 12:03 AM No comments: 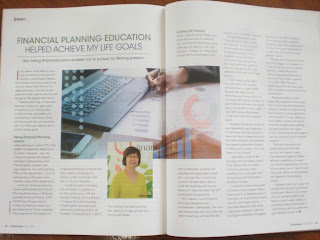 Jan 2019 - Smart Investor, one of the leading investment magazine in Malaysia featured Hellen Fong, owner of At 19 Culinary Studio in its Jan 2019 issue titled "Financial Planning Education helped achieved my Life Goals". This article talks about how being financially savvy has enabled the pursuit of a lifelong culinary passion which resulted in the opening of a cooking school and the publication of a cookbook, Lost Recipes of Malaysia, which won 2nd prize in the world famous Gourmand Cookbook Awards 2015.

Posted by At Nineteen Culinary Studio at 1:02 AM No comments: 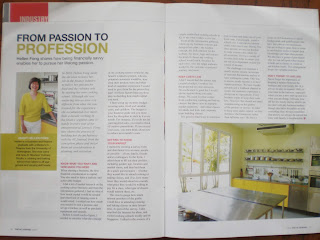 Oct 2018 - The official publication of the Financial Planning Association of Malaysia (FPAM)'s 4E Journal magazine featured Hellen Fong, owner of At 19 Culinary Studio in its October 2018 issue titled "From Passion to Profession". In this article, Hellen shares the process of building her dream business from conception and initial financial considerations to planning and execution.

Posted by At Nineteen Culinary Studio at 9:36 PM No comments: